It is with immense PRIDE that we share the achievement of our technician Mark D. who recently achieved his Journeyman’s License in plumbing!!! This license requires 4 years of evening classes 2 nights per week for approximately 6 months of the year. Additionally, individuals have to have worked a minimum of 8000 hours in their field of study under an apprenticeship registered with the state of Vermont…..just to qualify to take the test! We could not be more impressed with Mark’s dedication and work ethic over the last 5 years. We’re lucky to have him as part of the Bourne’s Energy family. Congratulations Mark, you did it! 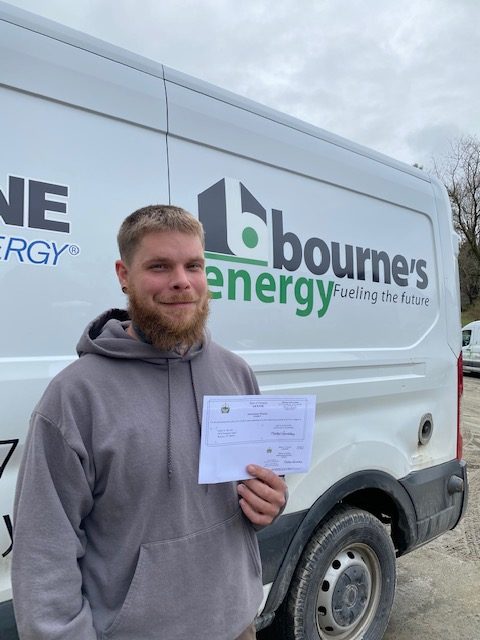 I just wanted to reach out to you on behalf of my wife. She was home today when you guys showed up for the propane delivery. She was extremely pleased with your employer who performed the delivery. Unfortunately she doesn’t remember his name, but she wanted to make sure that this message gets back to you. He was very friendly and helpful. He stayed with her until all her questions were answered and all the appliances were functioning correctly. Thank you very much for your assistance.

I wanted to thank the service department for getting out here as fast as they did, it was within the 45 minutes and the tech they sent out was excellent, very professional, his name was Chip Aubin, would you ensure his manager gets that message. I have to say, I have worked with a lot of companies in my career and customer service is so critical to successful businesses, I believe Bourne’s employee’s are an example of this high caliber customer service. Thank you again for the prompt professional service.

I have worked with another fuel company and in the past and the customer service from Bourne’s is incomparable. I am so happy I made the effort to switch everything over to Bourne’s! Also need to add that Mike is amazing – so efficient and was able to save me a lot of money on a furnace problem that was supposed to be very expensive. Creativity and expertise are so very much appreciated and Mike went above and beyond to help me get things running again. Cheers to everyone at the company – many thanks for making our fuel servicing into a pleasant experience, as it was definitely the opposite with other companies.

Pam, hi! I was just outside doing a little gardening. I glanced at one of my two propane tanks, and did a double-take. The tank at the front of my house had been leaning somewhat, since it was originally installed. When I looked at it this afternoon, it was standing perfectly straight. The tank has been completely re-set. The original rock that was underneath it was gone. Whomever re-set the tank found two nice slabs of concrete, (the ones that were originally beneath the OLD company’s tank), and used them to level and stabilize the Bourne’s tank. Thank you, and your worker(s) who did the good work!

Evan A
Go to Top